Birmingham 2022 is hosting the 16th official Queen’s Baton Relay – a journey which brings together and celebrates communities across the Commonwealth during the build up to the Games. The  Baton Relay will travel the length and breadth of England for a total of 29 days, before culminating at the Opening Ceremony for Birmingham 2022 on 28 July 2022. The Baton will visit Market Bosworth on Thursday 21 July.

The Birmingham 2022 Queen’s Baton Relay began at Buckingham Palace on 7 October 2021, when The Queen placed Her Message to the Commonwealth into the Baton and passed it to four-time Paralympic gold medallist Kadeena Cox, who had the honour of being the first of thousands of Batonbearers to carry the Baton.

Since then, the Baton has visited Commonwealth nations all over the world, before returning to England for the final countdown to the Commonwealth Games.

Commonwealth Games Federation President Dame Louise Martin DBE said: “The Queen’s Baton Relay symbolises hope, solidarity and collaboration across the Commonwealth at a time when it is needed most. It continues to inspire people wherever it goes and creates huge excitement for Birmingham 2022 as it journeys towards the Commonwealth Games Opening Ceremony on July 28.”

The Queen’s Baton for Birmingham 2022 was created in a West Midlands collaboration that fused art, technology and science. Made from copper, aluminium and steel, the Baton also features a platinum strand in homage to The Queen in her Platinum Jubilee year. It is also equipped with cutting-edge technology; 360-degree camera, heart rate monitor, atmospheric sensors and LED lighting. 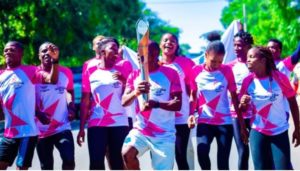 The Baton Relay in Market Bosworth on Thursday 21st July will start at Springfield Avenue at approximately 10:45 and will finish at the Market Bosworth School at about 11:10. Station Road and some other roads will be subject to short periods of closure during the morning and there will be some parking restrictions in place throughout the morning.

There will be an information stand in the Marketplace with more details about the baton relay and the Commonwealth Games. More information on the Queen’s Baton Relay can also be found at www.birmingham2022.com/qbr