Gladman has now resubmitted plans to HBBC for a development of up to 90 houses on Shenton Lane. 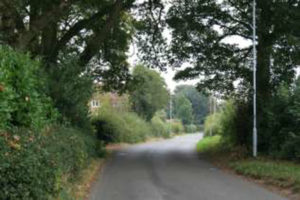 When consulted on the original proposals by Gladman, the majority of comments were against this development. Some 400 residents then contacted HBBC to object to this proposal and when reviewed by HBBC’s planning committee it was overwhelmingly rejected.

In spite of this, Gladman is persisting and has resubmitted the application with additional documents.

The proposed development is outside the settlement boundary. It is in open countryside and the views from both Shenton Lane and Sutton Lane (the gated road) would be severely impacted. In addition, the extra traffic generated on Shenton Land and Warwick Lane would exacerbate an already very difficult traffic problem. Proposals to add a walkway on Warwick Lane would have a direct detrimental effect on the roots of a number of mature trees and the narrow vehicle carriageway would remain. There is nothing in the new documents to show that the concerns of the community have been satisfactorily addressed.

The proposed development ignores the wishes of residents expressed in the Neighbourhood Plan, which was based on extensive consultation with residents and stakeholders and was supported by 89% of respondents in a referendum prior to its adoption.

The application can be viewed on the HBBC website at: hinckley-bosworth.gov.uk, select Planning  – Simple Search and enter reference 21/00966/OUT.

What can you do?

Object to this application by email to planning@hinckley-bosworth.gov.uk with a copy to clerk@marketbosworth-pc.gov.uk (Include your name and address so that HBBC knows that you are a resident) and include the planning reference 21/00966/OUT as soon as possible, and by Wednesday 20th October at the latest if you agree that it conflicts with the Neighbourhood Plan, the community vision and aims for the future of Market Bosworth.

Even if you objected last time you will need to object again as this will be treated as a new application by HBBC.

What else can you do?

Pass this email on to anyone you know in Market Bosworth who may want to object and ask them to do so and to register to be kept up to date on this website at www.bosworthvision.org.uk.