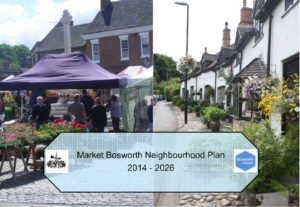 HBBC has issued a modification to the Neighbourhood Plan

You may recall that during 2014-15, consultations and a referendum were held in which our community adopted the Market Bosworth Neighbourhood Plan 2016 – 2026. This Plan was made to identify a “blueprint” for the future of Market Bosworth and was one of the first in England to achieve that status. A key element of the Plan was to allow the community greater control of how much housing development should take place and the preferred locations for this.

It became apparent during the last 18 months that, owing to changes in Planning regulations, and because of uncertainty surrounding the housing needs of Hinckley and Bosworth Borough Council, one aspect of our Neighbourhood Plan was classed ‘out of date’. This relates to the Housing Needs Requirement which had been based on the data provided by Hinckley and Bosworth Borough Council based on their Core Strategy. As a consequence, had we let this situation continue, we would have very limited protection from speculative development in the parish.

The Bosworth Vision Planning Group received a grant to contract AECOM, an independent consultancy, to undertake a full assessment of our current Housing Needs. For the period 2014-26 the resulting figure of 108 new dwellings was very similar to the original Plan’s figure of “100+”.

We are delighted that this new, more definitive figure provides an update to our Neighbourhood Plan. This will provide the planners with the up-to-date evidence when considering planning decisions. It also helps Bosworth Vision as we undertake a more comprehensive review of the existing Neighbourhood Plan, in conjunction with Hinckley and Bosworth Borough Council so that the wishes of residents can be met in the medium-to long-term (up to the late 2030s). 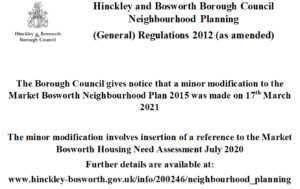